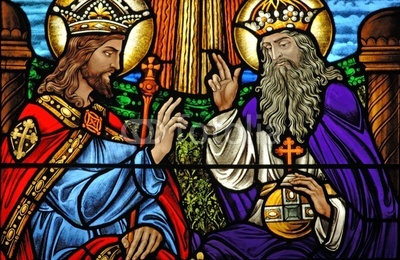 In today’s Gospel from the Mass (John 12:44-55), Jesus makes it clear where His authority comes from:

[44] And Jesus cried out and said, “He who believes in me, believes not in me but in him who sent me. [45] And he who sees me sees him who sent me.  [46] I have come as light into the world, that whoever believes in me may not remain in darkness.  [47] If any one hears my sayings and does not keep them, I do not judge him; for I did not come to judge the world but to save the world.  [48] He who rejects me and does not receive my sayings has a judge; the word that I have spoken will be his judge on the last day.  [49] For I have not spoken on my own authority; the Father who sent me has himself given me commandment what to say and what to speak.  [50] And I know that his commandment is eternal life. What I say, therefore, I say as the Father has bidden me.“

Jesus, the Only Son of the Father, makes it clear that He has been given authority from the Father.  Consider:

We live in a time when authority is rejected; people want to throw off ages of tradition in terms of sexual norms, revolt against governmental authority and to reject the Catholic Church.  At the core of the rejection of authority is a profound ignorance of the blessings of tradition and authority, most importantly of the Catholic Church and a delusional arrogance of self-governance.  The wildly immature think they know it all.  They don’t.

But Jesus Christ, the only perfect Man to walk the face of the earth, embraces the Authority of the Father.  Jesus speaks to those today who object to authority with a warning.

Like Father, like Son.  All who wish the peace and joy in this life and the life to come should embrace the Authority of the Son.