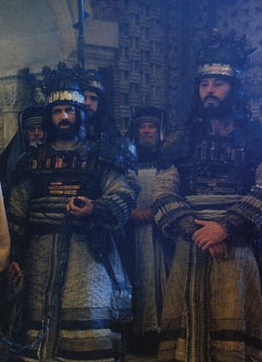 In today’s Gospel from the Mass (John 7:40-53), the Temple Guards say something remarkable about Jesus.An excerpt:

[40]When they heard these words, some of the people said, “This is really the prophet.”[41] Others said, “This is the Christ.” But some said, “Is the Christ to come from Galilee? [42] Has not the scripture said that the Christ is descended from David, and comes from Bethlehem, the village where David was?” [43] So there was a division among the people over him. [44] Some of them wanted to arrest him, but no one laid hands on him. [45]The officers then went back to the chief priests and Pharisees, who said to them, “Why did you not bring him?”[46] The officers answered, “No man ever spoke like this man!”

Any one who truly listens to Jesus with open ears and clean hearts can not help but be moved.  Even the Temple Guards, who are charged with carrying out the will of the Jewish leadership are stunned.  As seen in an earlier post, there is good reason for them to be stunned.

Jesus, the God of Creation, is Divine, and speaks of His own Divinity with Divine Eloquence.