Gnaw on this: “This is My Body and Blood” 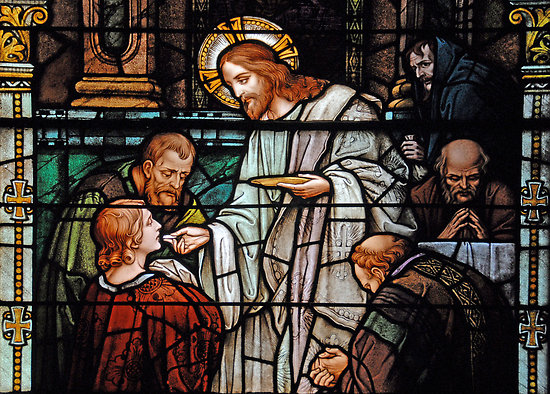 In the Gospel from the Mass for today and tomorrow (John 6:52-69), Jesus again re-iterates that the Eucharist is really and truly  is His real Body and Blood:

[52] The Jews then disputed among themselves, saying, “How can this man give us his flesh to eat? [53] So Jesus said to them, “Truly, truly, I say to you, unless you eat the flesh of the Son of man and drink his blood, you have no life in you;  [54] he who eats my flesh and drinks my blood has eternal life, and I will raise him up at the last day.  [55] For my flesh is food indeed, and my blood is drink indeed.  [56] He who eats my flesh and drinks my blood abides in me, and I in him.  [57] As the living Father sent me, and I live because of the Father, so he who eats me will live because of me. [58] This is the bread which came down from heaven, not such as the fathers ate and died; he who eats this bread will live for ever.”  [59] This he said in the synagogue, as he taught at Caper’na-um.

[60] Many of his disciples, when they heard it, said, “This is a hard saying; who can listen to it? [61] But Jesus, knowing in himself that his disciples murmured at it, said to them, “Do you take offense at this?  [62] Then what if you were to see the Son of man ascending where he was before?  [63] It is the spirit that gives life, the flesh is of no avail; the words that I have spoken to you are spirit and life.  [64] But there are some of you that do not believe.” For Jesus knew from the first who those were that did not believe, and who it was that would betray him.  [65] And he said, “This is why I told you that no one can come to me unless it is granted him by the Father.”  [66] After this many of his disciples drew back and no longer went about with him.  [67] Jesus said to the twelve, “Do you also wish to go away?”  [68] Simon Peter answered him, “Lord, to whom shall we go? You have the words of eternal life;  [69] and we have believed, and have come to know, that you are the Holy One of God.”

Jesus is teaching the Truth about the Eucharist but many don’t want to believe.  Except Peter.  Consider:

Many Christians, including all Protestants and many Catholics, don’t believe that the Eucharist is the real Body and Blood of Jesus Christ.  They want to believe that despite the multiple times that Jesus says it really is His Body and Blood, that somehow Jesus was talking figuratively.

This doesn’t square with the facts:  the Jews of Jesus time were very offended and left Him in droves.

Those who refuse to come to the Church to partake in the Eucharist are in a very real way acting just like the many false disciples who turned away from Jesus.  Or, they are cherry picking what Jesus says is true or not true, taking it upon themselves to selectively interpret Christ with their own limited and confused “wisdom”.

The Church that Jesus founded as always taught the truth of what Jesus said.  And only in the Catholic Church (and those in communion with her) can one partake in the real Body and Blood of Christ.