The Obedience of Jesus Christ 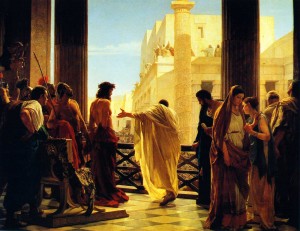 The Obedience of Jesus

The word “Obedience” comes from the Latin, oboedire, meaning “to obey, pay attention to, give ear.”  The Church teaches that obedience “in faith is to submit freely to the word that has been heard, because its truth is guaranteed by God, who is Truth itself” (CCC 144).

The disobedience of men to the Father traces back to Eden.  “Man, tempted by the devil, let his trust in his Creator die in his heart and, abusing his freedom, disobeyed God’s command…All subsequent sin would be disobedience toward God and lack of trust in His goodness” (CCC 397).  Man’s “concupiscence” leads him to pursue pleasure to the point of sin, rising up in rebellion and disobedience against God (cf. CCC 1871).  Since Satan deceived Adam, men have rebelled against the Father.

Disobedience is an epidemic today.   All over the world, angry men are rebelling against governments, society, religion and all forms of authority.  Feral young men are forming flash mobs around the world, bent on destructiveness, confusing mutiny for manhood.   Men are rebelling against the “constraints” of marriage, siring children out of wedlock and divorcing wives.  Sons are rebelling against fathers.  Men actively and passively rebel against organized religion, choosing to sin rather then be held to a moral standard.  Men, blessed to be Catholic, abandon or neglect their faith, becoming Casual Catholics.

Disobedience is destructive.  Man’s disobedience has tragic consequences: the harmony of Creation is broken and man is subject to the bondage of decay, pain and death (CCC 399-400).  History catalogs the destructive perpetual wars of man against man, of sons against fathers.  Today’s society shows the awful scars of disobedience; destruction of the family, addictions to pornography and other perverted sexual behavior, addictions to alcohol and drugs, the murder of children in the womb, mental illness, social unrest and widespread criminality.  At the center of all human suffering is disobedience to God.

Each man, young or old, is called to obedience to God, and each man, in his own way, has the need to be more obedient to God.  Jesus Christ, the Son of God, comes to the world to teach men that joy and true manhood is gained through obedience to the Father.

What Jesus Teaches through His Obedience

Jesus Christ, the King of All Creation, the most powerful human of all time, seeks to save men through His perfect obedience to the Father.  Through His Perfect Obedience, Jesus teaches:

To keep the 10 Commandments – As the Son of God, Jesus Christ is perfectly obedient to all the commandments of His heavenly Father.  His obedience to the Fourth Commandment to the Virgin Mother Mary and his legal father, Joseph, anticipates the obedience of Holy Thursday (CCC 532).  As the Obedient Son, Jesus teaches men to obey their parents, for it pleases the Lord (CCC 2217).

The Devil is defeated through obedience to God – Jesus shows how one can beat the devils’ temptations through His complete obedience to God in each of His responses to the Devil’s temptations (Matt 4:1-11).   “Jesus is the new Adam who… (is) totally obedient to the divine will.  In this, Jesus is the devil’s conqueror… Jesus’ victory over the tempter in the desert anticipates victory at the Passion, the supreme act of obedience of his filial love for the Father.” (CCC 539).

To be obedient in work – “By his obedience to…his humble work during the long years in Nazareth, Jesus gives us the example of holiness in the daily life of family and work.” (CCC 564).

Be obedient to His call to Evangelize – “Having been divinely sent to the nations that she might be ‘the universal sacrament of salvation,’ the Church, in obedience to the command of her founder…strives to preach the Gospel to all men”(CCC 849).  “This mission continues and…the Church, urged on by the Spirit of Christ, must walk the road Christ himself walked, a way of poverty and obedience” (CCC 852).

That holy obedience can overcome sinful passions – Jesus Christ’s obedience unto death gives men freedom through a holy life to make their bodies “obedient” and to resist “rebellion in (man’s) soul.” (CCC 908).

To render unto Caesar… – Jesus Christ teaches that God, first and foremost, must be obeyed, but that man must also cooperate with legitimate authority by “rendering unto Caesar” (Matt 22:21).  But when human authority abuses “natural law or the Law of the Gospel”, Christians are called upon to obediently defend their rights and the Church (CCC 1897, 2242, 2286).

The Obedience of Prayer – Jesus followed strict habits of prayer, adoration of the Father and keeping the commandments.  “Contemplative prayer is hearing the Word of God. Far from being passive, such attentiveness is the obedience of faith, the unconditional acceptance of a servant, and the loving commitment of a child.” (CCC 2716).