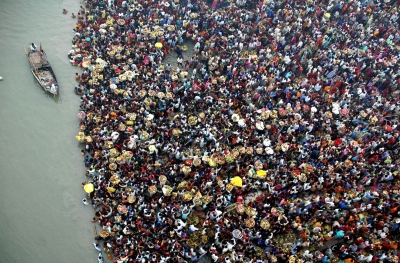 In the Gospel from Mass for today (Mark 3:7-12), Mark tells of how fervent the crowds were who followed Jesus in Galilee:

[7] Jesus withdrew with his disciples to the sea, and a great multitude from Galilee followed; also from Judea [8] and Jerusalem and Idume’a and from beyond the Jordan and from about Tyre and Sidon a great multitude, hearing all that he did, came to him.  [9] And he told his disciples to have a boat ready for him because of the crowd, lest they should crush him; [10] for he had healed many, so that all who had diseases pressed upon him to touch him.  [11] And whenever the unclean spirits beheld him, they fell down before him and cried out, “You are the Son of God.” [12] And he strictly ordered them not to make him known.

This is a remarkable recounting of how large and frenzied the crowds were that followed Jesus.  Consider:

The crowds are so drawn to Him that Jesus is concerned about being “crushed”.  They are moved to passionate action.

What will Jesus say about your passion for Him?