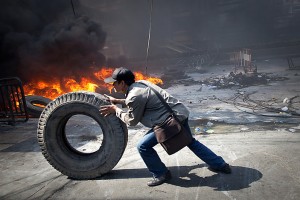 BANGKOK, THAILAND – MAY17: A red shirt protester runs past burning tires as the violence in central Bangkok continues May 17, 2010 in Bangkok, Thailand. So far in clashes over 220 have been injured and 29 killed as the military and the government launched an operation to disperse anti-government protesters who have closed parts of the city for two months. There is a state of emergency in effect that spreads to 17 provinces in the country. The Thai army declared certain protest areas where clashes are taking place a “Live Fire Zone”. (Photo by Paula Bronstein /Getty Images)