Who is the Greatest Man Impressed by Jesus? Hint: water. 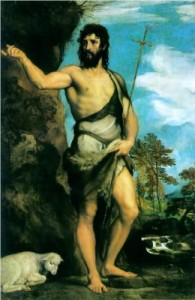 John the Baptist, the son of the elderly priest Zechariah and Elizabeth, after a miraculous conception, grew up and was baptizing in the wilderness east of the Jordan River. His deeds and preaching was so powerful that he attracted a lot of attention and a lot of followers.  The powerful Pharisees in Jerusalem are getting nervous because people were saying that John was the long-awaited Christ or a resurrected Elijah, so they sent priests out to question John (John 1:19-28).

John, in the humility of a truly great soul, does not claim credit for himself, but says:

“…among you stands one whom you do not know, even he who comes after me, the thong of whose sandal I am not worthy to untie” (John 1:26-27).

Why is John’s statement so astounding?  Here’s why:

In the ancient world, status, respect and honor were coveted.  Those with money had slaves and the lowliest slaves were charged with washing the feet of their masters.  John the Baptist, with his impressive following, drawing the attention of the big wigs in Jerusalem, considers himself to be below the lowliest of slaves compared to “he who comes after me.”

Jesus Christ puts John’s testimony in perspective:  The Lord of the Universe, Jesus Christ says about John the Baptist: “…among those born of women none is greater than John” (Luke 7:28).

If the greatest man who ever lived (other than Jesus, of course) is impressed by Jesus, shouldn’t we be impressed too?